The Embassy of Nepal, Muscat organized “Tea with Ambassador”/ “Awareness” program and provided consular services for the Nepalese at Muscat International Hotel in Salala on 6 July 2018. Salala is the second largest city of Oman where around 8,000 Nepalese are working in various sectors. H.E. Sarmila Parajuli Dhakal, Ambassador of Nepal to the Sultanate of Oman; Ms. Rojina Tamrakar, Second Secretary and Ms. Krishna Kumari Gauli, Labour Attaché arrived Salala from Muscat on the same morning for the program. 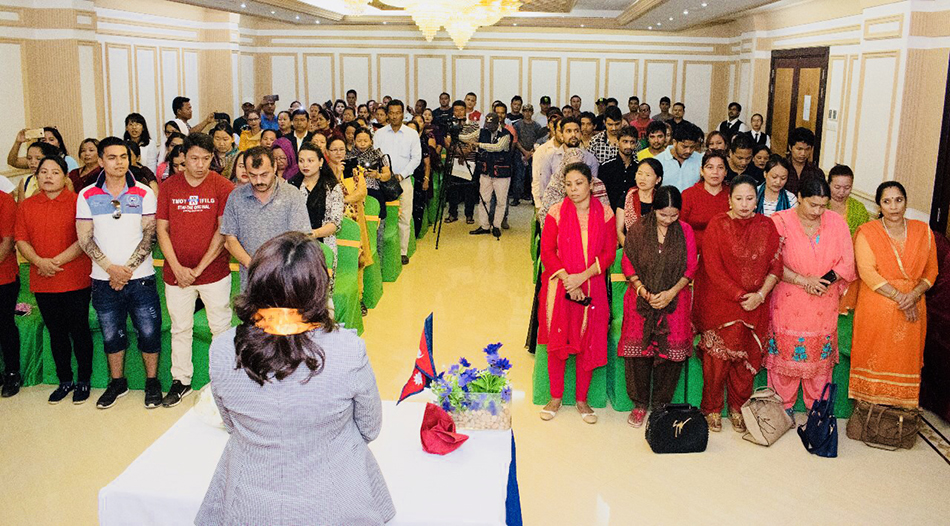 The program started with national anthems of the both the countries. After which, a minute of silence was observed in honor of the migrant Nepalese workers who lost their lives while working in foreign soil. Welcoming the participants, Ms. Rojina Tamrakar highlighted about the program schedules, activities of the Embassy and the details of consular services to be provided that day. In the program, Mr. Manoj Kumar Chand performed his multi writing skill (writing from both hands, elbow, feet, mouth, reverse writing etc.) and spoke about the importance of such skills specially for the differently able people. Ms. Krishna Kumari Gauli highlighted the situation, challenges, risks and safety habits for Nepalese Labor force as well as the laws and regulations of the Sultanate of Oman through a power point presentation. 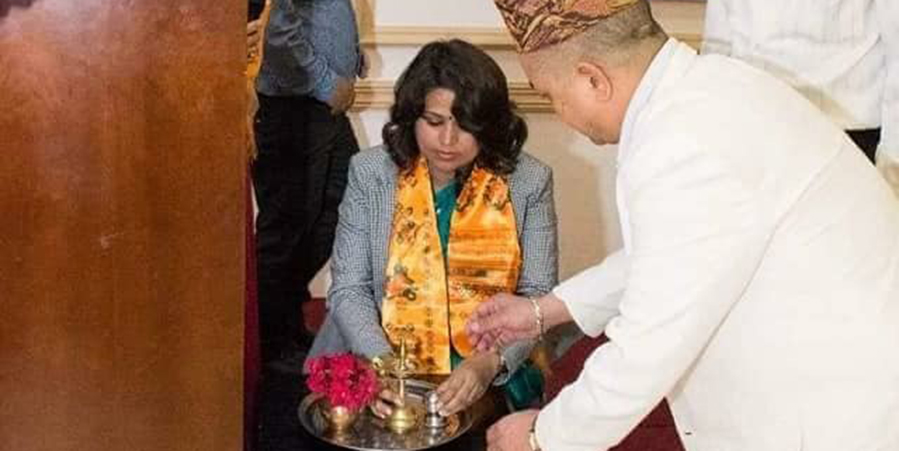 H.E. Ambassador honored Mr. Chand with a “Letter of Appreciation” for demonstrating his multi writing skills. Similarly, two businesspersons from Salala, Mr. Chandra Kumar Sunuwar and Mr. D.B. Ranabhat were also honored by H.E. Ambassador for their entrepreneurship in the foreign land of the Sultanate. Mr. Sunuwar had started a Nepali restaurant since 2009 A.D. and Mr. Ranabhat has recently opened a new Supermarket in Salala. While honoring them, H.E. Ambassador emphasized that each individual has certain kind of potentiality and skills which should be encouraged so that the nation and the people would be benefitted. H.E. Ambassador highlighted about ongoing activities of the Embassy and also informed about future plans. H.E. Dhakal appreciated Omani people and the wise leadership of His Majesty Sultan Qaboos and also the Sultanate’s natural diversity with its uniqueness. 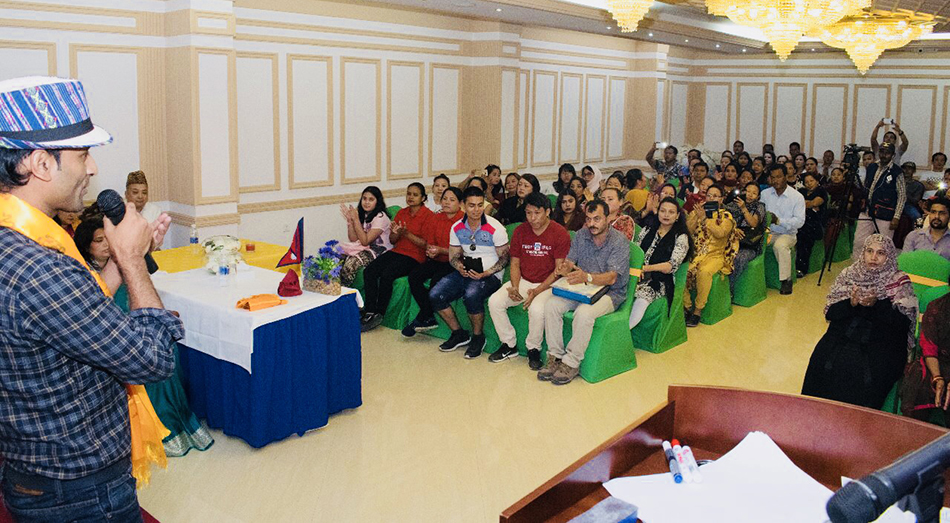 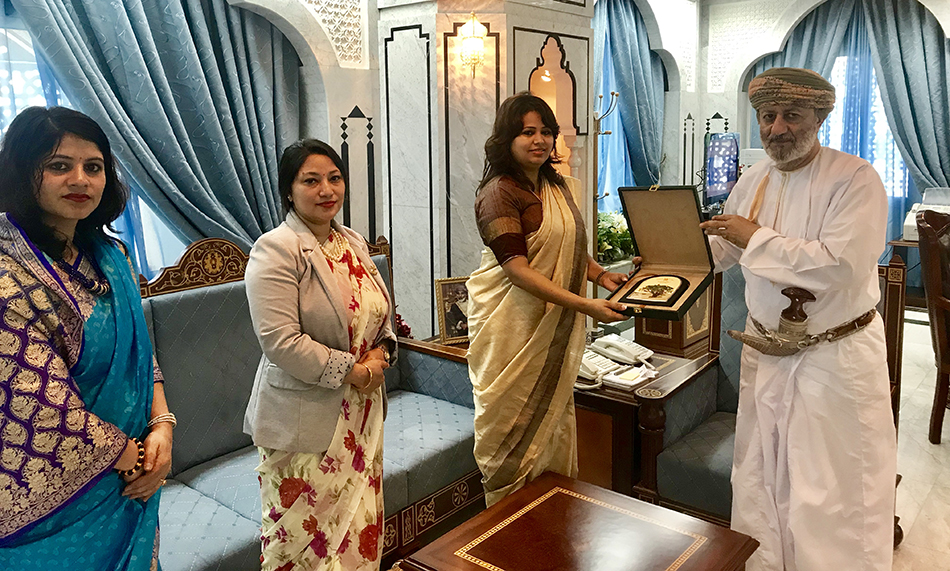 On 8 July 2018, H.E. Dhakal paid courtesy call on H.E. Mohammed bin sultan Bin hamood Al Busaidi, Minister of State and Governor of Dhofar of the Sultanate of Oman. H.E. Busaidi welcomed H.E. Ambassador to his office and congratulated for completing her first year successfully as the first Ambassador of Nepal to the Sultanate. H.E. Ambassador Dhakal expressed her happiness over the meeting. During the meeting, the two sides exchanged views about promoting business and tourism relations. Both discussed on the means to enhance the bilateral relations further as well as developing people to people relations. H.E. described Nepal’s current political scenario and highlighted concept of “Prosperous Nepal and Happy Nepali” of the Government of Nepal. Her Excellency Ambassador invited H.E. Minister to pay an official visit to Nepal. H.E. Busaidi thanked Her Excellency for her visit and kind invitation. H.E. Minister assured all type of cooperation in the future. 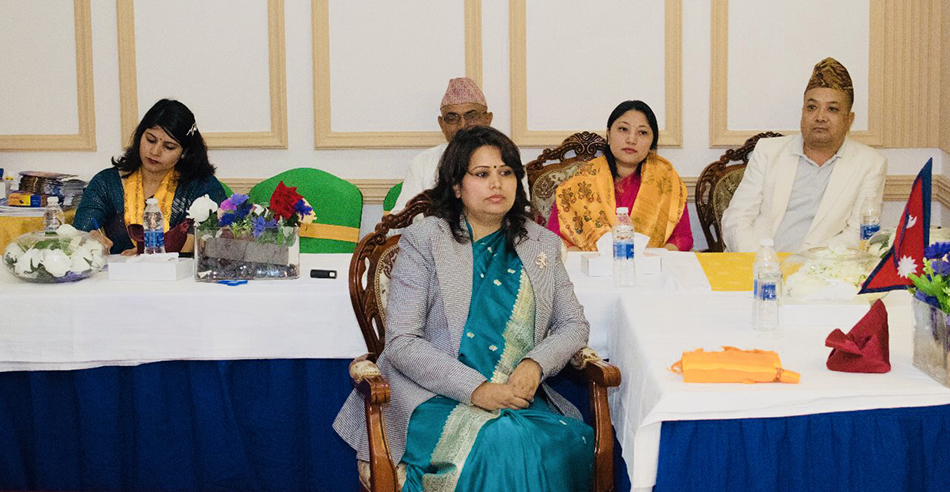