KATHMANDU, 11 August 2019 — Nepal’s export shipments can directly enter Bangladesh without the cumbersome process of transloading at the border, and Nepal’s cargo vehicles can carry export or transit cargo to the dry ports and ports in India and bring back India’s export cargo to Nepal or transit cargo from Indian ports, after Nepal implements the Bangladesh-Bhutan-India-Nepal (BBIN) Motor Vehicles Agreement (MVA). These and other benefits such as increased trade and tourism will accrue to Nepal through the BBIN MVA, as stated by experts in a program organized in Kathmandu by South Asia Watch on Trade, Economics and Environment (SAWTEE) and the Asian Development Bank (ADB).

The framework agreement of the BBIN MVA was signed in June 2015. However, further processes to operationalize the MVA was stalled after Bhutan’s upper house failed to ratify the agreement. The other three countries are now exploring, with Bhutan’s consent, ways to move ahead with the Agreement, as Bhutan’s consent has been received.

The Chief Guest of the program, Hon. Prof. Dr. Puspa Raj Kadel, Vice-chairperson of the National Planning Commission (NPC), commended the workshop for analyzing both the benefits of the MVA to Nepal and the concerns of stakeholders that should be addressed before implementing the MVA. To address the concerns and to make it a win-win for all, he suggested conducting pilot programs along certain routes for a few months, the experience obtained from which could be used to enhance the draft protocol of the MVA.

Mr. Ronald Antonio Butiong, Director at the Asian Development Bank, noted that the MVA would help reduce transshipment at the border, thereby leading to reduced logistics cost. He recognized, however, that there are misconceptions about the MVA, which he hoped the Workshop was able to clarify. For example, the MVA implementation would not result in a “free for all” in cross-border transport operations. The MVA has restrictions on number of permitted vehicles, allowable routes and border crossing points and technical specifications of vehicles. Foreign transport operators will also not be allowed to conduct domestic transport in the host country. Nevertheless, he acknowledged that there are concerns among stakeholders, which may be addressed through refinements in the MVA’s implementing protocols that will soon be negotiated.

Mr. Kedar Bahadur Adhikari, Secretary at the Ministry of Industry, Commerce & Supplies, emphasized that connectivity is Nepal’s priority and hence the ministry has advocated for implementation of the MVA after certain ambiguities in the agreement are clarified in the protocols. For instance, the charges and fees provisioned by the Agreement must not be so high as to impede movement and the provision of search and inspection must not be used in a way resulting in excessive checks. Similarly, the agreement should allay the concerns of our transport and logistics businesspersons.

Mr. Rabi Shankar Sainju, an expert on the topic and former Joint Secretary at the Ministry of Industry, Commerce & Supplies, Government of Nepal, presenting a comprehensive paper on the key features of MVA, elaborated on benefits to Nepal from the MVA — seamless connectivity, enhanced movement of containerized cargo, reduction in trade costs, transparency and uniformity in cross border practices, development of economic corridors, and improved people-to-people contact resulting in increased tourism and trade in services. He pointed out that the reduction in trade costs could be as much as 30% and recommended that a MoU be signed to implement the BBIN MVA amongst three countries on a provisional basis.

Mr. Gopal Prasad Sigdel, Joint Secretary at Ministry of Physical Infrastructure and Transport, and a lead Nepali delegate at the MVA negotiations; Mr. Ashok Kumar Temani, Chairperson at Road Transport & Transit Committee (FNCCI); and Mr. Naindra Upadhyaya, former secretary at the Ministry of Commerce & Supplies, the key discussants at the workshop, also emphasized the need to implement the MVA through signing the protocol agreements, after quickly clarifying some ambiguities and addressing concerns of the private sector.

“It could open avenues for alternative routes and ports for overseas trade and unhindered movement of cargo and passenger vehicles to third countries through India,” said Dr. Posh Raj Pandey, chairman of South Asia Watch on Trade, Economics and Environment (SAWTEE). He underscored that the ambiguities in the agreement can be and should be clarified in the Protocol.

Other participants, while stressing the need for improved connectivity, highlighted some possible practical problems such as lack of harmonization regarding load factors, ambiguities in the provision of permit and transit fees and charges, the disparity in the cost of vehicles among the countries, and possible environmental concerns, addressing which will make the BBIN MVA’s implementation beneficial to all the parties, resulting in seamless connectivity.

Once Bangladesh, India, and Nepal finalize and sign these two protocols, the MVA will formally operationalize.

Thank you very much ! 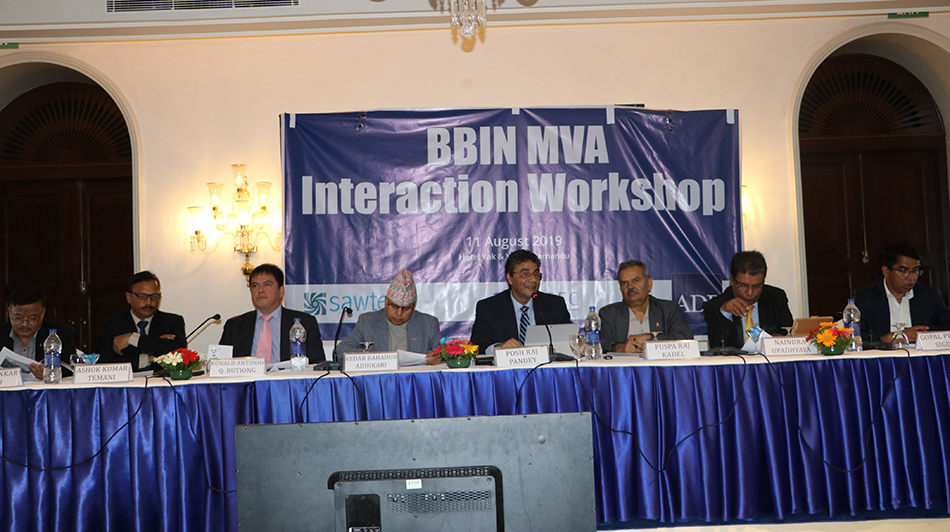