Kathmandu, Aug 5: Ministry of Industry, Commerce and Supplies (MoICS) and South Asia Watch on Trade, Economics and Environment (SAWTEE) organized an interaction programme to discuss Sanitary and Phytosanitary (SPS)-related international laws and practices which could impact agriculture trade. Considering the recent decision by Nepal government to make pesticides residue mandatory for the fruits and vegetables imports and eventual withdrawal of the decision within 18 days and ensuing public reaction, this event aimed at unknotting the issue. The main objective of the programme was to create awareness on SPS issues in agriculture trade and discuss measures that Nepal should undertake in moving forward.

Hon’ble Minister for Industry, Commerce and Supplies Mr Matrika Prasad Yadav pointed out that despite the initial turmoil created by recent policy change by the government and its retraction, it has also created an avalanche of awareness. He stressed the need to create awareness amongst the stakeholders regarding the issues related to World Trade Organization (WTO) and other regional and bilateral agreements. Reiterating the ministry’s commitment to WTO rules and regulations and that the misalignments was a result of lapses in procedure but not of intent.

Secretary for MOICS Mr. Kedar Bahadur Adhikari stressed the need to build legal, institutional and other mechanisms to regulate import as well export. He said that human resource is not a problem with the government but managing them properly is an issue. He said that we have reached a stage where all the basic framework have been set up and hence are in a state to leap frog and make rapid progress.

Dr. Posh Raj Pandey, Chairman, SAWTEE stressed the need to build related institutions and coordination amongst the relevant government institutions. He said that being a party to international agreements we have to be mindful of both the rights and duties and, hence, this programme is to discuss the optimal way to protect plant, animal and human life while honouring the international, regional and bilateral agreements. He further added that we need to make an attempt to discuss this issue with relevant stakeholders to build consensus for the way forward.

Presenting a paper on “SPS measures in Nepal’s agricultural trade”, Dr. Paras Kharel, Research Director, SAWTEE highlighted the high degree of import dependency on India for agricultural and food products, indicating that any disruptions at the borders will have severe implications.

Calling attention to the “letter” (allegedly sent by Indian Embassy in Nepal in response to Nepal’s policy change with regard to fruits and vegetables imports), Dr Kharel pointed out that it only talked about phytosanitary certificate, which, in reality, does not concern pesticides residue tests. His paper further delineated current sanitary and phytosanitary constraints such as lack of legislations, institutional inadequacies, human resources constraints, and most importantly, extremely poor state of testing facilities. Adoption of international standards for commodities that currently do not have standards, upgradation of laboratories, accreditation over the most important parameters and, ultimately, the mutual recognition agreements with the major trading partners, were pointed out as the likely way forward.

Emphasizing the need to protect the consumers from pesticides residue risks, Dr. Dilli Ram Sharma, Chief, Plant Quarantine and Pest Management Centre (PQPMC), pointed out the lapses made by government while implementing the policy, particularly, the failure to notify the policy change in advance—six months being the legally binding international norms. He also mentioned that pesticides test on each consignment of perishable items is not infeasible but also unprecedented globally and, hence, procedures like screening, certifications, risk-based sampling must be adopted to ensure that trade continues as usual and consumer health is not compromised. He also informed that agriculture ministry and its other bodies is rapidly moving ahead with necessary changes and the upcoming meeting between National Plant Protection Organizations of India and Nepal 16 August 2019 will be taking crucial decisions in addressing these issues bilaterally.

Mr. Jyoti Baniya, Chairman of Forum for Consumer Protection, pointed out the lack of proper legislative framework as a key constraint, for example, Nepal has not promulgated new laws to replace the outdated Food Act and Import Export Act. Nepal is yet to come up with the much-needed Accreditation Act.

Mr. Madhu Kumar Marasini, Joint Secretary, MoICS, pointed out the need to undertake more such consultations for strengthening out sanitary and phytosanitary regime so that consumer health interest are preserved and trade disruptions are avoided.

Dr. Dinesh Parajuli, MD, Agriculture Enterprise Centre, Federation of Nepalese Chambers of Commerce and Industries, pointed out the need to enhance awareness among farmers regarding use of pesticides, as well as, improving capacity of our laboratories and human resource.

Other participants of the programme included officials from concerned department under MoALD, representatives from farmers’ associations, consumer and human rights activists, representatives from media, among others. They pointed out the need for equipped laboratories, internationally-recognized accreditation of laboratories, paving the way for mutual recognition agreements, and effective coordination between government agencies and other stakeholders. 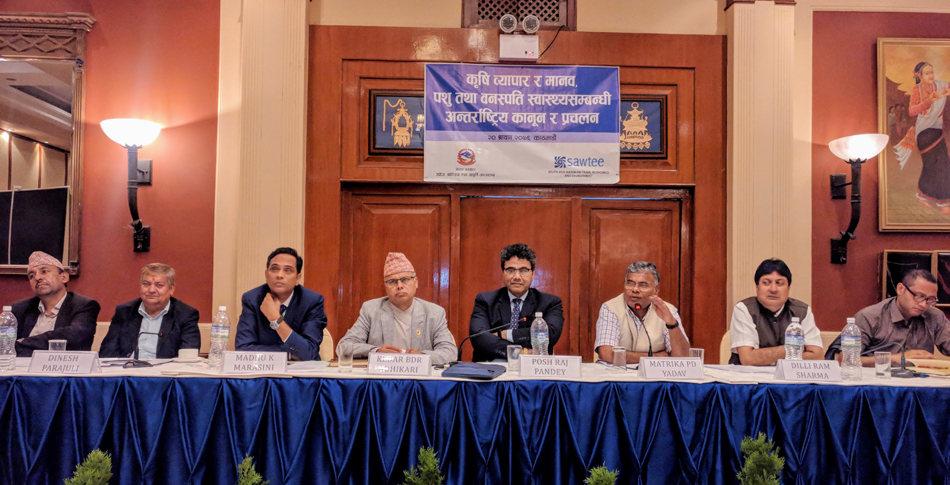