BACKGROUND:
Tourism is a service-intensive industry. The success of the industry largely depends on the quality of customers’ services experience through services offered by service providers like accommodation by hotel industry, flight service for airlines, food served by restaurants, and travel and tour service by travel agents or tour operators. The companies which offer quality services excel, while others fail.

The travel and tourism industry is one of the largest industries in the world with a direct contribution of US$ 2.22 trillion to the world GDP in 2015, according to World Travel & Tourism Council (WTTC). It is forecast to 3.3% in 2016 and 4.2% per annum till 2026, contributing US$ 3.46 trillion to the world GDP in 2026. Traditional market leaders like France and the United States of America take major share of this pie, while emerging countries are coming up fast in order to reap the economic benefits of the industry. International tourist arrivals increased from 528 million in 2005 to 1.13 billion in 2014. The arrival figures are forecast to exceed 1.8 billion by 2030. Each year, Europe receives the most international tourist arrivals. It also produces the most travelers: with 575 million outbound tourists in 2014, the region had more than double that of the second largest tourist origin, the Asia Pacific region, according to WTTC. China had the largest international tourism expenditure in the review year, followed by the United States and Germany. 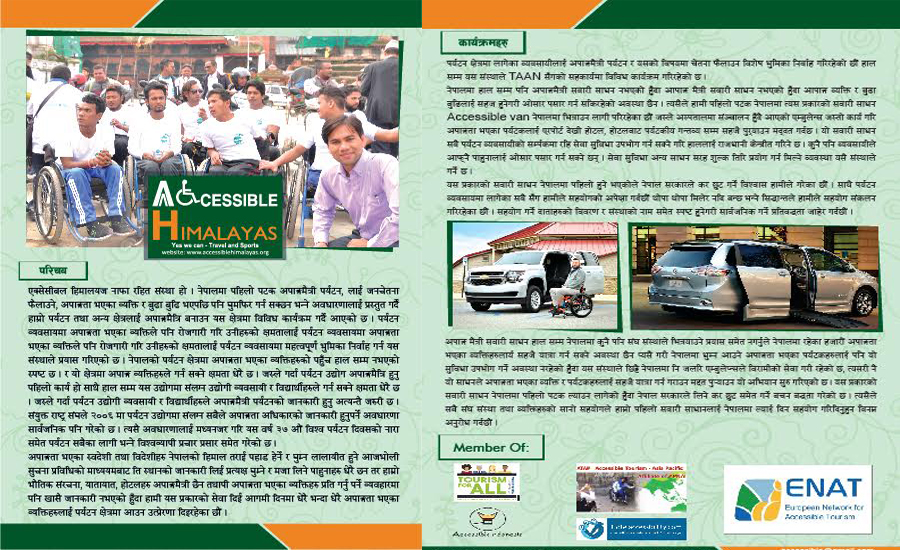 ACCESSIBLE TOURISM:
So far, there is no universally agreed definition of accessible tourism. According to UNESCAP’s Takayama Declaration, Accessible Tourism, which is also known as ‘Access Tourism’, ‘Universal Tourism’ and ‘Inclusive Tourism’, among others, is tourism and travel that is accessible to all people, with disabilities or not, including those with mobility, hearing, sight, cognitive, or intellectual and psychosocial disabilities, older persons and those with temporary disabilities. Going by this definition, the population with disability was approximately 650 million when the declaration was issued i.e. 2009. This is a huge market. But many tourism markets are putting different forms of disabilities in the same basket and tailoring products and services for them accordingly. It won’t yield results as accessible tourism needs to cater for different needs of disability, covering the areas of hearing, vision, mobility, mental health and social needs, among others.

The Convention on the Rights of Persons with Disabilities states: “To enable persons with disabilities to live independently and participate fully in all aspects of life, states parties shall take appropriate measures to ensure to persons with disabilities access, on an equal basis with others, to the physical environment, to transportation, to information and communications, including information and communications technologies and systems, and to other facilities and services open or provided to the public, both in urban and in rural areas. These measures, which shall include the identification and elimination of obstacles and barriers to accessibility, shall apply to: buildings, roads, transportation and other indoor and outdoor facilities, including schools, housing, medical facilities and workplaces; and information, communications and other services, including electronic services and emergency services.”

According to Dimitrios Buhalis and Simon Darcy, Accessible Tourism is a form of tourism that involves collaborative process between stakeholders that enables people with access requirements, including mobility, vision, hearing and cognitive dimensions of access, to function independently and with equity and dignity through the delivery of universally designed tourism products, services and environments.

Researches and studies regarding accessible tourism are still in nascent stage. But even handful of studies is sufficient to know that the market is growing at a steady rate. According to a study conducted on behalf of the US-based The Open Doors Organization, disability travel generates over $17.3 billion in annual spending in the USA alone in annual spending. If spending of accompanying family members is counted, the figure rises to $34.6 billion. The study shows that 71 percent of the respondents travelled in the last two years. This indicates that the demand is very much high. “Roughly two out of ten Americans with disabilities have taken six or more trips in the past two years, the same as in earlier studies, with an average trip length of 5 days,” the study conducted in 2015 states. Similarly, statistics prepared by the European Network on Accessible Tourism shows the annual spending of disability travel was 80 billion euros annually.

As US and Europe is among the largest tourism markets of Nepal, these statistics shows there is a promising market for accessible tourism in Nepal.

ACCESSIBLE TOURISM IN NEPAL:
Nepal is an exotic tourism destination in the country. But the country is not all about Himalayas only. Spread over 147,181 square kilometers, Nepal is rich in terms of culture, tradition and bio-diversity. Kathmandu, the capital city of Nepal, is no different from other cosmopolitan cities in the world, having good restaurants andgigantic malls to shop for leading global brands, among other facilities. But the inner sanctum of this city still preserves timeless culture and tradition dating back to centuries. You will be surprised to see people pulling chariots as part of a colorful jatra from the window of a swanky restaurant with a steaming cuppa by your side. Such is diversity of this country. Nepal was closed to foreigners until 1950s. But the country had already come into notice of adventure enthusiasts as some of the tallest peaks in the world line up the countries northern frontiers. Mountaineers had started coming here even before the country formally opened its doors for foreigners. They used to take special permits from the then Rana rulers. The successful ascent of Mt Everest in 1953 by Sir Edmund Hillary and Tenzing Norgay Sherpa was covered by leading media outlets of the world with great prominence, giving Nepal the much-needed publicity. Today, Nepal is getting visitors from all segments – adventure lovers, pilgrims, wildlife enthusiasts, holiday makers and MICE, among others. Of late, people with disabilities have started visiting Nepal. But the number is very few. This is because many travel trade companies do not know what accessible tourism is. Similarly, only few hotels and restaurants have infrastructure for people with disabilities.

The theme for this year’s World Tourism Day is ‘Promoting Universal Accessibility’. It has helped a lot to promote accessible tourism among government officials and the tourism operators. Trekking Agencies’ Association of Nepal (TAAN), for example, teamed up with Accessible Himalayas to organize an awareness rally in Kathmandu’s tourism capital of Thamel. People in wheelchairs and crutches participated in the rally with placards carrying message like ‘Promote Universal Accessibility’, ‘Make Tourism Accessible to All’, ‘Respect People’s Rights to Movement’, among others. The rally, which was inaugurated by Tourism Secretary Shankar Prasad Adhikari, went through major thoroughfares of Thamel where nearly 50 percent of tourism enterprises are based. To some extent, the rally was able to raise awareness about accessible tourism among tourism entrepreneurs of Thamel.

Apart from raising awareness, lack of awareness and absence of laws requiring tourism entrepreneurs to come up with accessible tourism products and services is a major challenge for Nepal. Only a few hotels in Kathmandu have rooms for accessible tourists. Though major public buildings have railings and ramps, they do not have accessible restrooms and other facilities. These infrastructure shortcomings should be addressed by bringing new laws if we are to make our tourism inclusive.

PROSPECTS:
Nepal, as a premier destination in the Himalayas, holds great tourism potentials. Though the country has been welcoming visitors from all segments, the number of tourists in the accessible tourism segment has remained rather low. Worrying factor is, arrival figure in this segment is not recorded separately. This suggests that the arrival figure is very low. This is because no concerted effort has been taken by the government, the NTB and tourism entrepreneurs to welcome visitors from this segment.

But this doesn’t mean that the country is not getting any visitors from this segment. Amputees have reached the summit of Mt Everest. So nothing is impossible. Similarly, there have been several visits of people with disabilities to different trekking areas of the country, according to working paper prepared by Pankaj Pradhananga and Suman R Timsina. Similarly, we can see senior citizens observing timeless culture and tradition of the country in the narrow alleys of Kathmandu Valley. The interest is there. We only need to cash in on that by developing necessary infrastructures, and raising awareness, and encouraging tourism industry people to make different packages for senior citizens and people with disabilities, among others.

CHALLENGES:
There are many challenges or barriers that the country must overcome if it is to benefit from accessible tourism. Some of the challenges have been outlined below:

THE PATH AHEAD:
The government needs to make serious policy intervention to develop Nepal as an accessible tourism destination. There are certain steps toward that need to be followed if Nepal is to ban accessible tourism destinations. These steps can be taken by following the code of conduct prepared by European Network for Accessible Tourism. The code of conduct has been reproduced below: