Seminar on “Tourism, Trade and Investment Opportunities in Nepal”

Hyderabad, 04 May, 2018: “It is the opportune time to invest in Nepal”, was the clear message conveyed during the seminar on ‘Indo-Nepal Trade and Investment Opportunities in Nepal’ concluded today. The seminar was spearheaded by FICCI in partnership with the Embassy of Nepal in Hyderabad, the purpose being to identify and promote emerging business opportunities between the two countries in potential areas of cooperation.

The seminar brought together prospective Indian investors as well as senior officials of Embassy of Nepal in New Delhi for interactions on facilitating the Indian investments in various sectors including tourism, hydropower, construction, pharmaceuticals, textiles, wood and wood products, telecom, transport equipment, food processing, chemicals, light engineering, IT and ITeS etc. Nearly 100 participants including representatives of the Embassy of Nepal in New Delhi, and public and private sector companies of India, as well as media persons took part in the event. 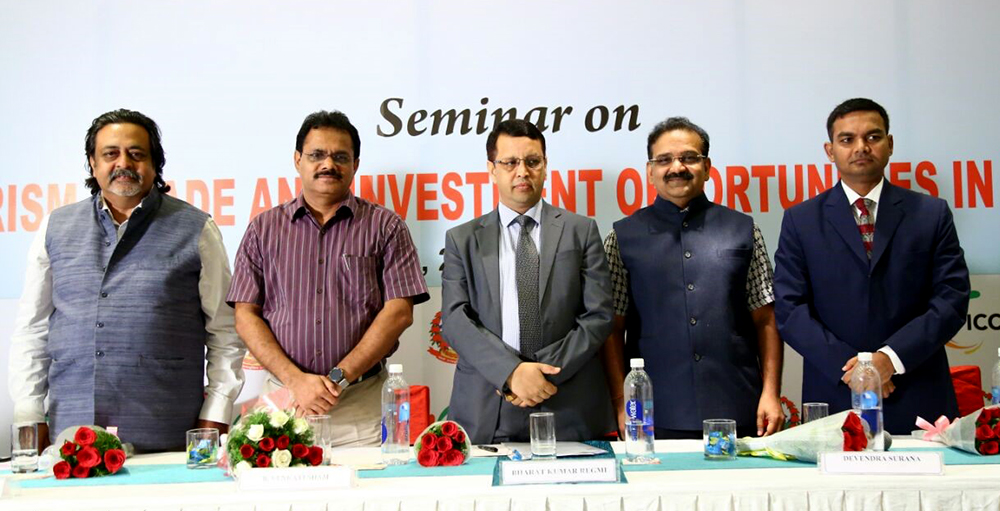 Mr. Bharat Kumar Regmi, Charge d’Affaires a.i., Embassy of Nepal said that there are ample and ready to tap opportunities for investment and cooperation for the Indian companies in different sectors in Nepal and invited Indian investors to invest in the country and reap rich dividends. He further added that the year 2018 is a year of new beginnings in Nepal after successful conclusion of three tiers of elections, paving the way for political stability and good governance. Highlighting the Government’s policy of attracting foreign investment, he called on Indian companies and entrepreneurs to utilize the opportunity for investing in Nepal’s sectors by taking full advantage of its enormous possibilities and the Government’s favorable industrial and investment policies.

Mr. Krishna Hari Pushkar, Minister-Economic, Embassy of Nepal made a detailed presentation on various areas for potential investments in Nepal. He also urged business community to invest in Nepal while describing the Government’s support and facilitation measures to boost the business relations mentioning competitive advantages available particularly in hydropower, infrastructure development and adventure tourism sectors. He reiterated that the Government of Nepal and the Nepalese private sector work well in tandem. Through sustainable economic development, Nepal is working towards political stability, peace building, trade facilitation and economic capacity building.

Mr. B. Venkatesham, Secretary of Tourism, Government of Telangana highlighted importance of Indo-Nepal relationship, saying that the economic cooperation can bring the people of the two countries even closer. He added that recently formed Government in Nepal is engaged in the task of political and socio-economic transformation of the country through peaceful and democratic means to make it a stable, inclusive, full-fledged democratic and prosperous country. Mr. Venkatesham also highlighted that Government of Telangana is interested to sign an MoU with the Nepal Tourism Board to promote India and Nepal together as tourism destinations.

FICCI has been at the forefront in its engagement process with Nepal for strengthening bilateral economic relations between the two countries. The apex industry chamber has been closely working with the relevant stakeholders – be it from the government, the two embassies, its MoU partners in Nepal – FNCCI and CNI or academia, etc. It is FICCI’s third engagement with Nepal this year following the formation of a stable government in the country. Earlier this year, FICCI had hosted an interactive session with senior journalists from Nepal and had also co-organised an India-Nepal Business Forum in honour of the Prime Minister of Nepal, Rt. Hon’ble K.P.Sharma Oli and the high powered delegation from the country.

The seminar also witnessed participation of Mr. Sanjay Kapur, Secretary General, The Federation of Telangana and Andhra Pradesh Chamber of Commerce and Industry (FTAPCCI); officials from Embassy of Nepal in New Delhi and representatives from the Indian industry. The seminar was well received by local business community of Telangana.

The Global Competitiveness Index 2016-17 ranks Nepal in 98th position among the 138 countries which makes the Himalayan nation the fourth most competitive economy in South Asia. India tops the list in 39th position. The bilateral trade between the two countries has increased extensively from US$ 3631.94 million in 2012-13 to US$ 5892.72 million in 2016-17.