Hindu statesman Rajan Zed, in a statement in Nevada (USA) today, said that Lord Ganesha was highly revered in Hinduism and was meant to be worshipped in temples or home shrines and not to adorn one’s legs. Inappropriate usage of Hindu deities or concepts or symbols for commercial or other agenda was not okay as it hurt the devotees.

Zed, who is President of Universal Society of Hinduism, also urged NoMiNoU Athleisure and its CEO to offer a formal apology; besides withdrawing legging and capri carrying images of Lord Ganesha and sacred syllable Om from its website, retail outlets and other resellers.

Zed further said that such trivialization of Hindu deities was disturbing to the Hindus world over. Hindus were for free artistic expression and speech as much as anybody else if not more. But faith was something sacred and attempts at trivializing it hurt the followers, Zed added.

In Hinduism, Lord Ganesha is worshipped as god of wisdom and remover of obstacles and is invoked before the beginning of any major undertaking. Om is the mystical syllable containing the universe, which in Hinduism is used to introduce and conclude religious work.

Objectionable legging and capri, part of NoMiNoU’s “Karma Collection”, were priced at $89.99 and $79.99 respectively, with the description “Allow this positive energy to help you reach higher consciousness”.

Online retailer and wholesaler NoMiNoU, apparently headquartered in Tsawwassen (Delta, Greater Vancouver), with retail locations in Tsawwassen and Rocky View (Alberta), claims itself as “wearable art” and an “innovative and eco-friendly lifestyle brand” “designed, printed and manufactured entirely in Canada”. NoMiNoU, with tagline “we are all one”, claims to be “honouring cultural diversity” and “aims to highlight global cultures”. Jullianna Charlton is the Founder and Creative Director of NoMiNoU (pronounced and standing for “no me, no you”); which sells bottoms, tops, accessories, etc. 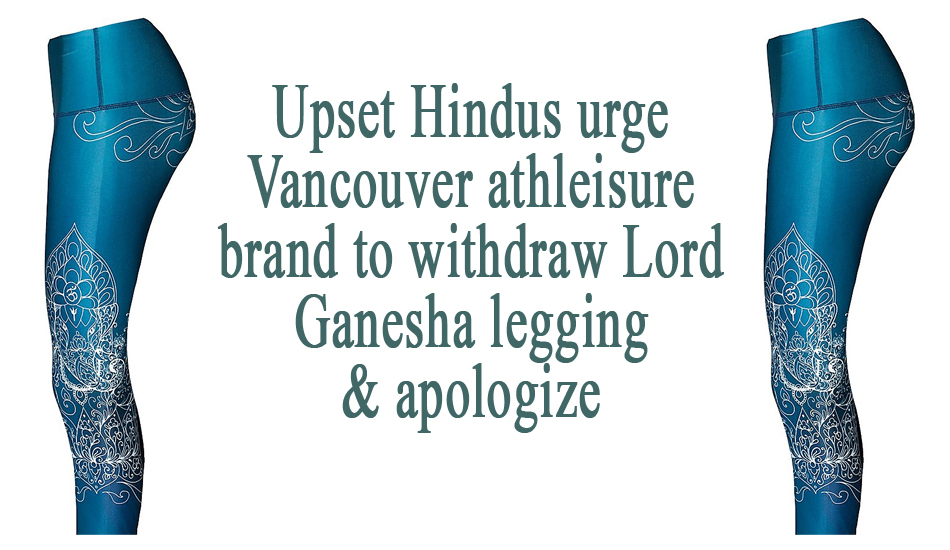