French Embassy in Nepal, Nepal Economic Forum and the Alliance Française jointly organize a debate on “Facing our Time”

In a series of debates designed to stimulate thinking and get the ideas and knowledge flowing, the French Embassy, Nepal Economic Forum and the Alliance Française came together again for the 5th debate which focused on “Facing our Time”. The conversations explored the emerging discourses from a multi-dimensional and multi-disciplinary approach.

The panelists for this year included:
• Mr Arnico PANDAY, Atmospheric Scientist. Currently, he is Regional Programme Manager of ICIMOD’s Atmosphere Programme. He is also on the Board of Trustees of Ullens Education Foundation and on the Advisory Board of Nepal Economic Forum.

• Ms Camille HANESSE, founder of Cosy Nepal. She promotes Newari patrimony through conservation of traditional houses in the Old Patan. She introduces people to un-spoilt places of the Kathmandu Valley.

• Ms Shiwani NEUPANE, Journalist, Entrepreneur and Novelist from Nepal. She also works full time as a Director of Ambe Group Nepal and currently heads the Conglomerate’s instant noodle division. She is also a Vice Curator at the Global Shapers Kathmandu Hub, a part of the World Economic Forum.

• Ms Shrinkhala KHATIWADA, Goodwill Ambassador for the 70th anniversary of the establishment of diplomatic relation between Nepal and France and Miss Nepal World 2018.

The debate was broadcasted live in the Internet and a proceeding report will be available in February 2019.

Some of the key points raised by the panelists:
Mr Arnico PANDAY stressed on the issue of climate change as the major issue of our time. He talked about how the narrative of climate change has been clearer with recent assessments. Arnico marked that with accelerating activities and consumerism, we have limited time to stabilize the climate. Therefore, a major switch is needed in our energy consumption and behavior pattern, which can be a major business opportunity for emerging ventures.

Ms. Camille HANESSE who is involved in promoting Newari patrimony through conservation of traditional houses in the Old Patan, emphasized that we need to stop renovating for the sake of renovating. Linking heritage conservation to employment, Camille marked that heritage conservation is a great opportunity for young people in terms of job creation.
Ms. Shiwani NEUPANE while reflecting upon the times where social media perpetuates hopelessness underscored that this culture of hopelessness is what promotes the trend of migration in the country. She noted that Nepal needs to be seen as a rich and booming economy and rather than seeing as a country of despair. Regarding the environment of entrepreneurship in Nepal, Neupane marked that incubation and innovation should be backed by government policies.

Ms. Shrinkhala KHATIWADA cited upon the merits as well as the demerits of social media. Shrinkhala reflected on how the media has the power to influence a society and noted that in today’s era where viral news gain more popularity than important government policies, it is important to raise awareness to create optimism regarding the growth of the country and also raise hope in people.

About Alliance Française/Katmandou:
Since its creation in 1994, Alliance française of Kathmandu has been providing French language classes within its premises and through the city. It organises cultural events regularly and also has a library and a cafeteria. It offers translation and interpreting services. Alliance française of Kathmandu was created in the same way as each of the 834 Alliances françaises around the world: from the will of local Francophiles who simply want, under a quality-label, to promote in their country a language and a culture that they love. Alliance française differs from cultural organisations in other countries by a particular mission: promoting, not only the culture of a country, but the “cultural diversity.” In a global world where the ways of life and the ways of thinking tend to become standardized, where culture finally becomes a marketable product like any other, the Alliances françaises continue to offer a cultural alternative.
About Nepal Economic Forum:

Nepal Economic Forum is a not-for-profit organization that functions as Nepal’s premier private sector led economic policy and research institution. Neftalk is a platform for policy discourse and discussion on pertinent economic issues. 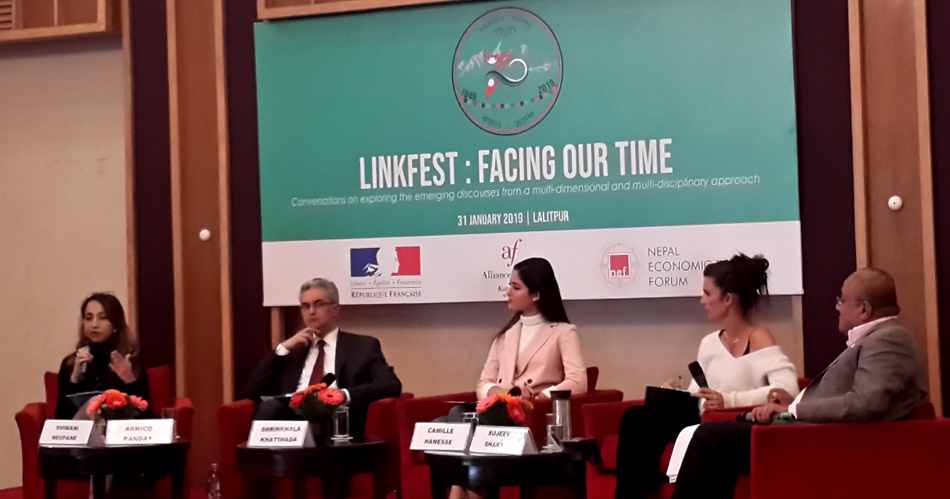