Kathmandu, Minister of Foreign Affairs Pradeep Kumar Gyawali met with Dr. Yin Li, the Governor China’s Sichuan Province in Chengdu Friday.
According to the Embassy of Nepal in Beijing, matters pertaining to bilateral interest, including further accelerating people-to-people exchanges between Nepal and the Sichuan Province were discussed during the meeting.

The two sides also discussed the historical connections, geographical proximity and cultural similarities between Nepal and the Sichuan Province of China, and mentioned the role of Chengdu as an important gateway between Nepal and China, reads the statement from the Embassy of Nepal.

Earlier Friday, Foreign Minister Gyawali delivered a lecture on ‘Nepal-China Relations and Development Prospects in the Trans-Himalayan Region’ at Sichuan University in Chengdu. In his speech, he highlighted five areas of mutual interest, namely transport connectivity; agriculture, industry and technology transfer; human resources development; tourism and culture; and people-to-people contacts– as important sectors for bilateral cooperation between Nepal and China.

The President of the University Li Yanrong and other senior officials, faculty members, Chinese and international students, including Nepali students, were present in the program, it is said. During his stay in Chengdu, Minister Gyawali met with leaders of Sichuan Investment Group, which has made joint-investments in Nepal’s hydropower sector. 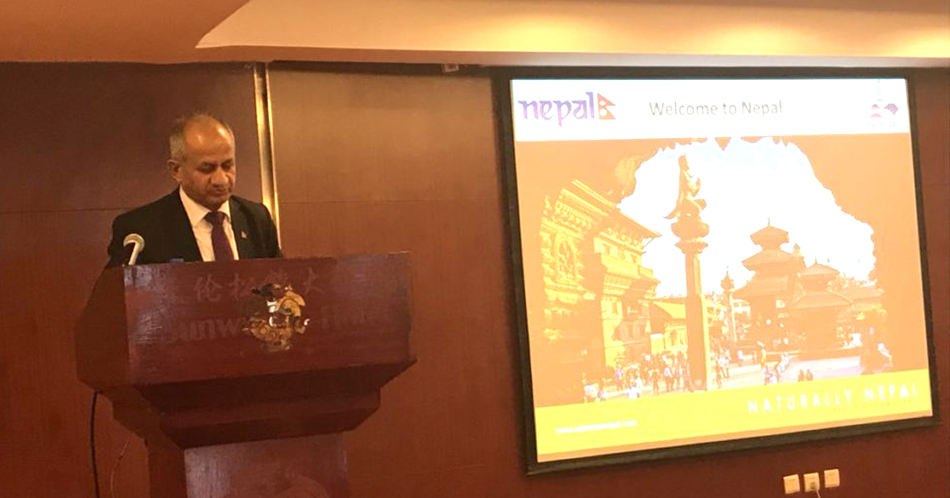 In his meeting, Gyawali assured that Nepal was committed to creating an environment conducive for Chinese businesspersons and investors in Nepal, and would take necessary measures for facilitating investments in sectors such as energy and hydropower, agriculture and manufacturing, among others. Minister Gyawali is on a five-day official visit to China and is arriving home on Saturday.