A home is submerged by water from the flooded Brazos River in the aftermath of Hurricane Harvey Friday, Sept. 1, 2017, near Freeport, Texas. (AP Photo/Charlie Riedel)

HOUSTON, Sept 2, 2017 (AFP) – President Donald Trump headed to Texas and Louisiana on Saturday to meet rescuers and survivors of Hurricane Harvey, one week after the powerful storm blasted the region and unleashed historic flooding.

The trip comes after the White House asked Congress for $7.85 billion for Harvey-related “response and initial recovery efforts,” calling it a “down payment” on the long-term cost of recovering from the catastrophic flooding.

Trump and his wife Melania departed from Andrews Air Force Base outside the US capital just before 10 am (1400 GMT) enroute to Houston.  The president is returning to Texas for his second visit since the megastorm hit, and will also visit neighboring Louisiana. One week after Harvey slammed into southeast Texas as a Category Four hurricane, rescuers were still searching by air and by boat for people trapped in flooded homes.

A fresh blaze broke out late Friday at a chemical plant in Crosby, northeast of Houston, sending a giant plume of thick black smoke billowing into the sky. And as floodwaters receded in Houston, the fourth most populous city in the United States, nearby cities such as Beaumont — which had lost its water supply — and Port Arthur struggled to recover.  “I ain’t never seen nothing like it in my 37 years,” said Tobias James, surveying the damage to his home in Port Arthur, including the two ruined cars in his flooded garage.

Just two days earlier, the oil and gas refinery worker was hoisted out of rising floodwaters by a rescue helicopter, along with his wife and children.  Harvey has been blamed for at least 42 deaths thus far and tens of billions of dollars of damage. 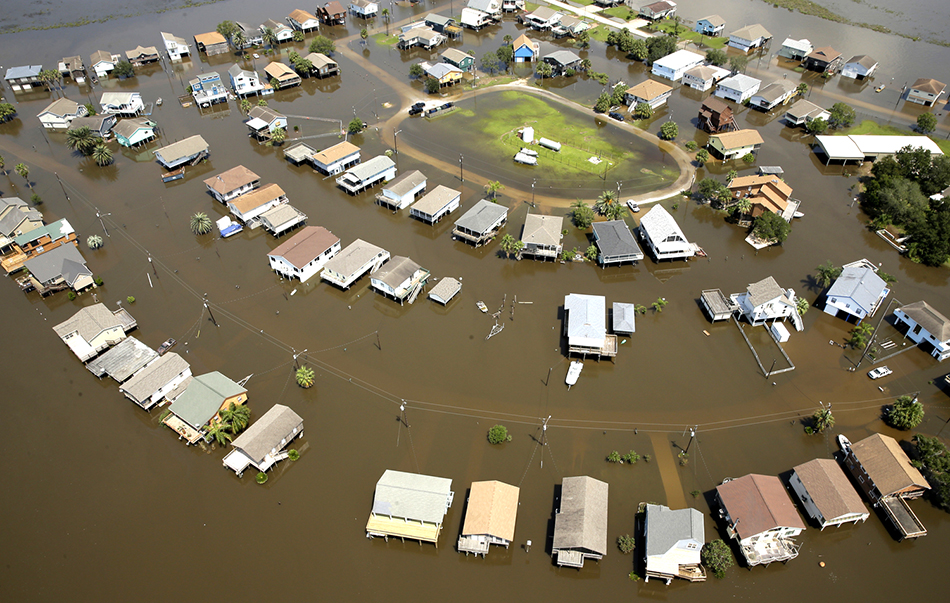 Homes are surrounded by flood water in the aftermath of Hurricane Harvey Friday, Sept. 1, 2017, near Galveston, Texas. (AP Photo/Charlie Riedel)

The White House’s request for nearly $8 billion in emergency storm aid — made in a letter late Friday to House Speaker Paul Ryan — was $2 billion more than what the White House was expected to request, suggesting a rapid rise in needed funding as the scale of the disaster becomes clear.

White House budget director Mick Mulvaney, who said the administration would later be seeking an additional $6.7 billion for disaster relief, called on Congress to lift the debt ceiling, warning that otherwise the outlays could be affected.

Trump, who has declared Sunday to be a “National Day of Prayer” for victims of Hurricane Harvey, put an upbeat gloss on the situation.  “Texas is healing fast thanks to all of the great men & women who have been working so hard,” he tweeted on Friday. “But still so much to do. Will be back tomorrow!” He added later: “Great progress being made!”

Meanwhile, rescue workers in Port Arthur were still evacuating residents who refused to leave their homes during the storm.  Jonathan Caldwell, a former police officer, said he and some friends rescued about a dozen people in one flooded neighborhood Friday. “We had little ones on our shoulders, wading through chest deep water this morning,” he said.

Drying Houston:
Houston Mayor Sylvester Turner said most of the city was “now dry,” but urged residents living near two overflowing reservoirs to leave their homes.  Officials said most of the 15,000 to 20,000 area residents have left. Some however were holding out, straining emergency workers who have to maintain services to them, including providing them with water.

Turner said the most pressing needs were housing for people who have lost their homes, and debris removal. He estimated that around 40,000 to 50,000 Houston-area homes had suffered damage, and said federal assistance was needed urgently. “We need the resources now,” Turner told CNN. “In fact let me back that up. We need the resources yesterday.”

Shelter from the storm:
While flood waters were receding in much of the state, some areas remain dangerous, such as Beaumont, a city of some 120,000.  Texas Governor Greg Abbott said the Neches River, which runs along the eastern edge of Beaumont, was currently about seven feet (2.1 meters) above the record and was continuing to rise.  “This poses an ongoing threat to Beaumont and the surrounding area,” he said.  A major hospital in Beaumont began evacuating its 200-odd patients on Thursday after the water cut out, and a dozen premature babies were airlifted out on Friday.

Baseball is back
One bright spot: the Houston Astros, the city’s major league baseball team, announced they will be home for games this weekend.  The Astros abandoned their home stadium this week for three games in Florida against the Texas Rangers.

“We hope that these games can serve as a welcome distraction for our city that is going through a very difficult time,” Astros president Reid Ryan said. “We hope that we can put smiles on some faces.” Houston-area schools were assessing damage to see if they could reopen by Tuesday, the Houston Chronicle reported.

Schools were supposed to resume classes last Monday but Richard Carranza, superintendent of Houston’s largest school district, told the newspaper that at least 35 had sustained damage or lost power during the storm. Many families with children headed over the Labor Day holiday weekend to the partially-reopened Houston Zoo.